There exist now a range of techniques to perform genome editing, such as ZFN, CRISPR, TALENS and AAV, each with their own strengths and weaknesses. However, one consistent element that has a significant impact on the success of that editing event when generating an isogenic cell line is the choice of parental cell line to be engineered.

Recombinant adeno associated virus (rAAV) is a precise and effective method to introduce defined changes into endogenous genes and rAAV vectors can stimulate homologous recombination (HR) up to 1000-fold over that seen using plasmids.

Nuclease based approaches like CRISPR-Cas9, ZFNs and TALENs facilitate targeted modification of genomes by inducing double-strand breaks (DSBs) within chromosomes at specified locations. This stimulates the natural DNA-repair mechanisms of homologous recombination and non-homologous end joining.

Plasmid DNA, PCR products, and single stranded oligonucleotides are routinely used as donors to introduce specific changes at the DSB site. The efficiency of introducing a desired change is dependent on many factors including

We have looked at whether rAAV vectors can be used as donors for DNA modification to obtain higher efficiencies than seen with other donor approaches.

Is CRAF required for the maintenance of KRAS mutant non-small cell lung cancer?

KRAS is one of the most frequently mutated genes in cancer, but targeting KRAS with potent small molecules has proved to be difficult. Moreover, although inhibitors of BRAF and MEK, which are downstream targets of KRAS, have been developed, they have transient benefits only in patients with melanoma who have mutated BRAF. Therefore, an effective therapy for KRAS-driven tumours remains a pressing unmet medical need.

Neomorphic mutations targeting amino acid R132 of the TCA cycle enzyme, IDH1, have been identified in multiple cancer types and lead to a build up of (R)-2-hydroxyglutarate (R)-2HG.

Several mechanisms have been proposed to account for mutant-IDH1-mediated transformation:

According to some reports in the literature, heterodimer formation between mutant and wild-type alleles of IDH1 is important for the production of high levels of (R)-2HG1.

We were interested in exploring novel ways to target tumour cells bearing mutant IDH1 alleles that were distinct from the obvious opportunity available to identify mutant-specific IDH1 inhibitors. The potential metabolic vulnerabilities of mutant IDH1 cancers raised the possibility that wild-type IDH1 might be essential for tumourigenesis or tumour maintenance in this context.

The emergence of RAS mutations is a key mechanism of acquired resistance to MAPK-pathway targeted agents in a number of cancers. The preclinical evaluation of targeted agents traditionally relies on panels of genetically unrelated cell lines grown as 2D monocultures. The heterogeneous nature of these panels makes identifying genotype-specific responses a challenge. In addition, 2D assays do not accurately mimic the tumour microenvironment and so add to the difficulty in interpreting which cellular responses to targeted agents will have relevance in vivo.

Getting started with CRISPR gene editing

Laboratory-based CRISPR gene editing has only been around a short while but is already revolutionizing the way we do biological research - allowing scientists to study gene function in more robust or even previously un-imagined ways.

Much information about the role of specific genes in fundamental biological processes and the onset and progression of genetic disease has been gleaned by researchers having the ability to selectively alter the genomic composition of individual genes and study the consequences. This approach enables researchers to observe the effects of a specific mutation, SNP or deletion in combination with the added layers of regulation present within the cell, including post-translational modification, epigenetic changes associated with chromatin structure, and transcriptional mechanisms.

While the Nobel prize winning work of Capecchi, Evans and, and Smithies introduced the concept of manipulating the genome of mouse ES cells, the ability to manipulate a broader range of cell types, human cells in particular, remained a significant challenge for some time. The more recent discoveries of nuclease based targeting technologies like zinc finger nucleases (ZFNs), transcription activator-like effector nucleases (TALENs), and clustered regularly interspaced short palindromic repeats (CRISPR) has greatly increased interest in genome editing and provided even more efficient platforms for achieving targeted genome modification. Despite the increases in efficiencies these technologies offer, there are still a wide range of factors that influence success and failure in genome editing.

While the scope of genome editing is very broad and includes whole organisms, this article will focus on the issues faced primarily by scientists attempting to modify the genome of immortalized cell lines. The ability to create isogenic cell lines in which the genome editing event is the sole differentiator between the phenotypes of two cells is a powerful tool. Despite all the recent developments and improvements in targeting platforms, certain challenges remain and the role played by the choice of cell line in order to achieve success cannot be understated.

Due to their larger size and higher intelligence rats are superior to mice for many neuroscience fields, but for historical reasons including challenges with genome editing they have often been overlooked in preference to the mouse. However, programmable nuclease technologies such as zinc finger nucleases (ZFNs) and CRISPR/Cas9 system have made engineering rat models much easier, and in this manner it is now possible to introduce the Cre-LoxP system into the rat.

Using gene editing we have created a suite of rat models for optogenetics research, consisting of various neuron-specific Cre drivers, Cre activity-dependent fluorescent reporter and opsin-expression rat lines. You can find our complete characterization of these rats in our recent publication in PLOS ONE, but below we detail some of the analysis that demonstrates that the Cre expression in these Cre driver rats faithfully recapitulates that of the respective endogenous gene.

Following transfection of CRISPR reagents, cells will need to be single cell diluted to obtain a clonal population. There are several ways of doing this. Below we detail the single cell dilution protocol used at Horizon. 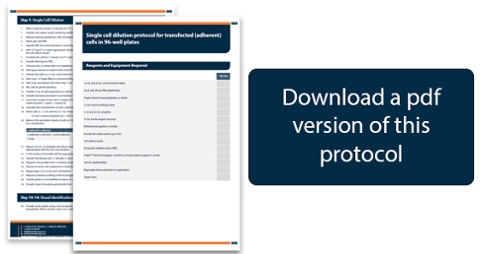 If a cell line tolerates being single cell diluted then plating 96-well plates at 1 cell per well in standard cell culture media is appropriate.